For those that know what roll joints are, skip ahead to the next bit.
Roll joints are helper joints to eliminate the 'sweet wrapper' effect that linear skinning gives when twisting along the joint axis. By distributing the rotation across a number of joints you can maintain volume in the mesh, and the more joints you use the less volume you lose.

In this post I'll be covering how I set up roll joints for the upper arm to give a nice distribution of down-axis twist deformation regardless of the rotation values of the arm joint.
Generally it's a bad idea to drive any roll joint directly from the rotation of another (you can get away with driving forearm roll joints from the wrist so long as you choose your wrist joint rotation orders very carefully). This is especially true for the upper arm which has such a large range of movement it is guaranteed that an axis will be crossed which will give you sudden changes in Euler rotation values, making it impossible to use them to drive a twist joint.


This way of driving upper roll joints is completely independent of the rotation values of the arm and so is completely stable at all times.


Here we have the skeleton built with two roll joints for the upper arm (in green). Note that they are leaf joints, i.e they are both children of the arm joint and have no children of their own. 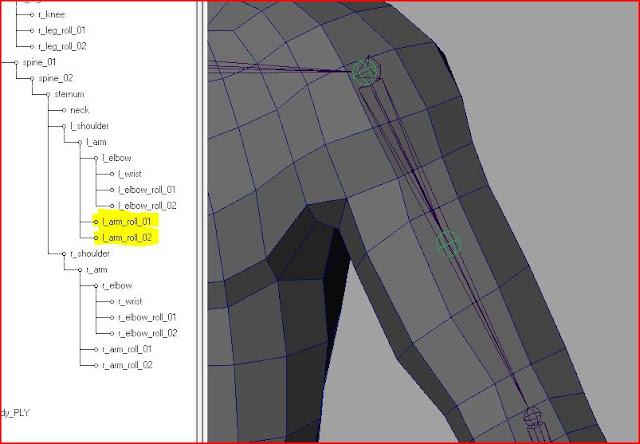 I see a lot of rigs with roll joints in sequence (arm-->roll_01-->roll_02-->elbow), but in my own view I think the leaf structure is far superior.


Note: I will assume the top spine joint is called sternum, the upper arm joint l_arm, elbow l_elbow and the roll joints l_arm_roll_01 and l_arm_roll_02.


Create a two joint chain called l_arm_roll_vecDriverJoint. Its world space translateX value should be zero (in line with the center of the character). In Y it should be at the same height of the arm joint, and in Z should be around 20cm behind. Joint orientation and rotation orders are not really important. 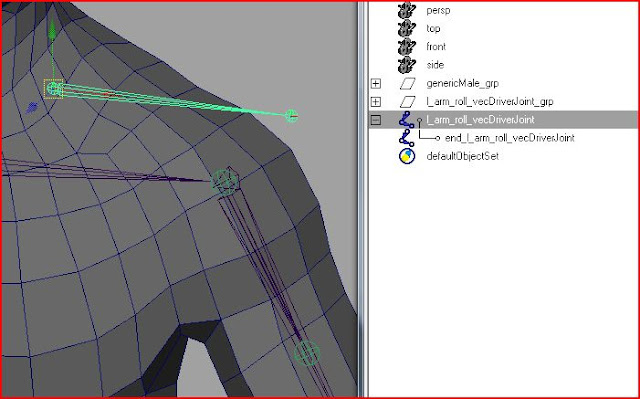 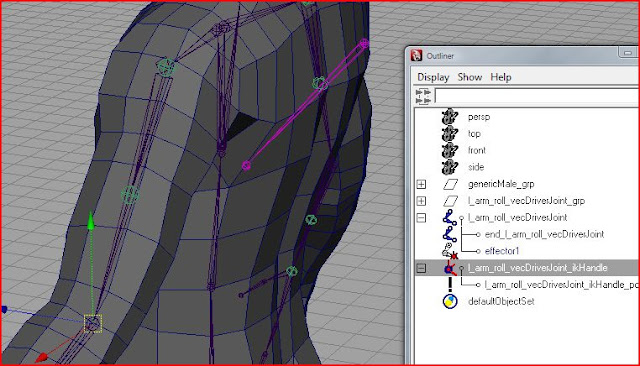 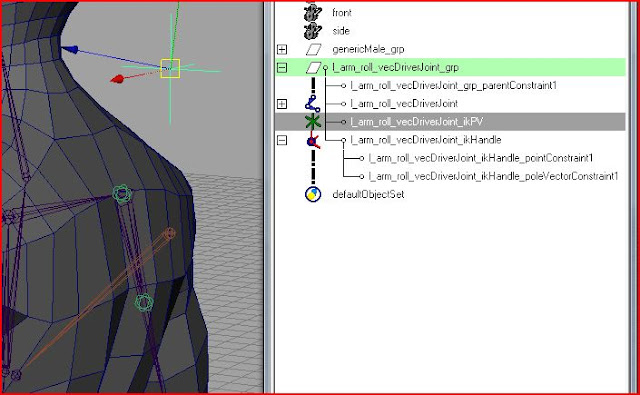 Create a locator defDriver_l_arm_roll_01_aimUp. Parent it to l_arm and set all rotate and translate attributes to zero. Now, in a single translate channel (Z in this example, but it depends on your joint orientation) move the locator behind the arm by around 40cm and down its length by 15cm. 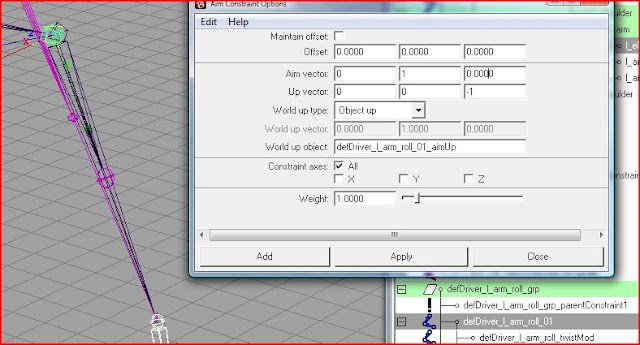 Finally, point and orient constrain l_arm_roll_01 to defDriver_l_arm_roll_01 and do the same for the second roll joint so the skinned joints are being driven by the roll systems.


Here is a quick capture showing the system working. Note how I can drag the arm around without any concern of the rotation values and the roll joints are perfectly stable at all times.