It's impossible to overstate the importance of an organised approach to rig building. Even if the rig is a simple one it's a good idea to maintain good working practices at all times. As rigs become more complex and require ongoing work or bug fixing days, weeks, or even months after it was initially built a good scene and rig structure is essential if you are to stand any chance of making sense of it all.

Rig structure - separate out your systems.

Character rigs consist of three main sections.
The exportable skeleton is an unbroken skeletal hierarchy. Meshes are skinned to this skeleton, and this is what is exported to game. It is driven by the control/driver rig and deformation rig by point and orientation constraints, but other than that it remains completely separate to all deform or control systems. This separation of systems is a key principle in rig building. 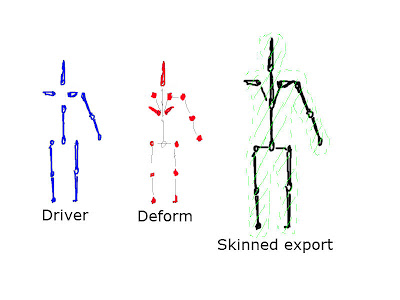 The control/driver skeleton is derived from the exportable skeleton. Because our export skeleton is kept separate we are not limited to keeping the driver skeleton as a contiguous hierarchy and this enables us to construct much more powerful control schemes.

There isn't necessarily any right way of organising your scene, this is just the way I choose to do it.

Everything is under a single top group called <char name_grp>.
For the purposes of this post, ignore the global scale group as it hooks into some custom tools I may get round to covering in the future.
Here you can see the basic principle of separating the rig structure in the way the scene is organised.
Deform contains all systems associated with automatic deformation - roll joints etc. etc. Also in here is the exportable skeleton. Control contains all the driver joints, ik systems etc. etc. that make up the control/driver rig. Mesh contains all the skinned exportable meshes, and anim_controls contain all the animation controls. 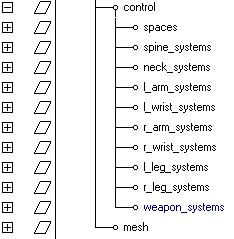 ...and the same for deform. The root joint at the top of the hierachy is the  export skeleton. 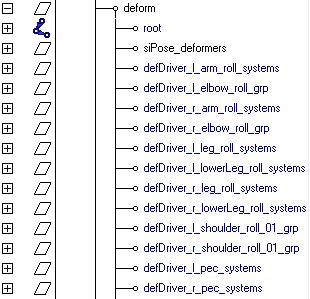 I have a shelf script to create the basic groups:

...you'll notice some extra attributes on there which I use later on to back up character set info and also store the state of the character set. This info is then used in some custom tools for a single-click character reset that places the control rig in the default pose.