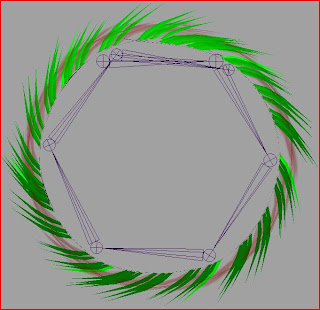 I've set up a really quick scene that broadly represents how in-game hair can be constructed. The flat plane represents the skinned body of the character, the green mesh the hair planes.

You can download a .rar archive of the file here.

I've placed a joint chain along the centre of the plane and smooth skinned the mesh to it. Painting weights on a single mesh like this takes no time at all; a default weight and spending a minute smoothing values gives a quick smooth deformation. Really it couldn't be quicker.

The problem is how to paint our weights on the hair elements. Attempting to manually paint weights on these kinds of meshes is extremely time consuming and often near impossible where there are lots of closely overlapping pieces (this example mesh isn't at all representative of the complexity that would be usual in our in game models).Then there is also the problem of operations such as flooding smooth not crossing mesh boundaries even if the planes are combined into a single poly. So in short, for a number of reasons, painting weights on this kind of thing is a total arse.

One solution would be to simply copy skin weights from the underlying plane to the hair mesh. Lets do that and see what we get... 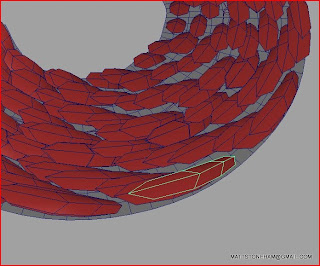 Well, it follows the underlying surface fairly well. But just look how much that selected hair segment has stretched and distort; it's around three times its length at rest. On the inside the planes are heavily compressed.
Here is another view as the plane is curled into a cylinder. 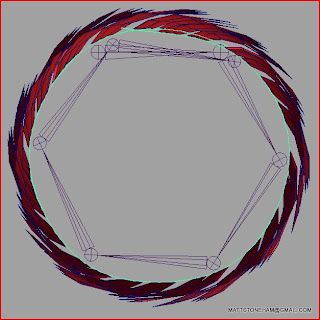 It kind of looks o.k I suppose but it doesn't feel like hair or fur; the the hair segments feel rubbery as they stretch, distort and bend identically to the underlying plane. With better skin weights we can get something that looks and feels much more like fur as the underlying surface moves around.

So, here are the same two examples with the hair planes auto skinned.
Here you can see that the hair segments still perfectly follow the surface underneath, i.e appear attached to it, but are much less stretched and distorted. On the bottom picture you can see the faint red of the previous hair skinning to compare the two directly.
If you haven't already you can download this file from the link earlier in the post and look at the differences yourself. 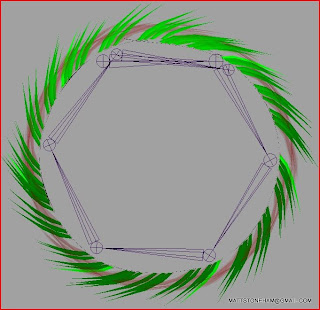 Lets look at the two different skin weight values generated for a single hair plane in the component editor. The bottom group is the hair mesh segment with a simple copy weights from the underlying poly plane, you can see the varying weight values that result in the rubbery deformation.
The top group are skin weights for a hair segment automatically generated by the hair skinning tool, here the weight values are unified for each vertex in the hair segment. This means that distortion of the segment is kept to the absolute minimum. (You will still get some stretching; the only way to avoid that would be to skin to a single influence only. Clearly it's not practical to do this in a game engine setting as you would need a joint per segment to do it.)

So far we've established that we can get a better result with more appropriate skin weights. Now that's not entirely surprising, the real problem we need to solve is how to set those weights on this type of mesh that doesn't require loads, potentially hours even, of really fiddly weights painting.
Let's have a look at the tool to set these weights for us automatically.

Below is a link to the script so you can load it into your text editor and I'll go through individual parts of it underneath. You will also need this script for copying weight values between verts as it is called within the NT_skinHair procedure.


The first bit is really straightforward; storing the source mesh (the underlying 'skin'), the target mesh (our hair planes) which should be a single combined mesh, and the skinClusters for each.


Next, copy skin weights from the source mesh to the hair mesh. This means that the closest vertex on the hair segment to the source mesh has the weight values values we want to apply to all verts on that segment.
Also, grab a complete vertex list for the hair mesh. Using the -fl flag on the ls command ensures you get a return per vertex, rather than a single return containing a range.

For $vert (a given vertex anywhere on the hair mesh), a complete list of verts for that segment is returned by the procedure NT_skinHair_returnSegmentVerts. Then, all verts except one ($vert) are then removed from the array $vertList. So, each loop I'm essentially stripping out all but one of the verts for a given hair segment from the array $vertList. Eventually this leaves the array containing just one vertex per segment. Editing verts out of the array $vertList as the loop is operating on it means that the tool is much quicker as it's not checking verts multiple times - as each loop completes the size of the array the loop is working on reduces in size.

So, now we have an array that has one vertex per hair segment. This allows us to do our skin weighting for each one.
We just need to figure out what weight values we should apply to all the verts in the hair segment. Because of the weight copy earlier I know that the vertex closest to the source mesh (our plane in this example) has the weight values I want to apply to the whole segment.
The way we go about finding which is the closest point is using two locators sourcePosLoc and meshPosLoc, a closestPointOnMesh node and a distance node.


The closestPointOnMesh node takes two inputs; sourcePosLoc.translate and a source mesh. In the example here this is the plane the hair sits on. The output is to the locator meshPosLoc.translate


As the locator sourcePosLoc moves around the closestPointOnMesh figures out the closest point on the mesh to that locator and outputs that position to the locator meshPosLoc.

So, for each vertex on a hair segment we move the input locator sourcePosLoc to it and check the distance between it and output locator meshPosLoc. The closest vertex on the hair segment to the source mesh is the one that returns the shortest distance. Once that vertex is identified, the weights are copied from this to the other verts on the hair segment using the procedure NT_copyWeightsVertexToVertex.