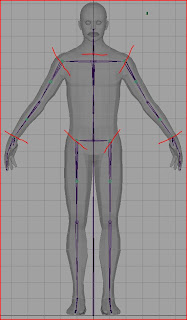 In essence, a broken hierarchy rig is one where the character is split into sections connected by constraints rather than being based on a unbroken skeletal hierarchy. Building a rig in this manner enables you to build much more powerful and flexible rigs. As an extra bonus it encourages clear scene organisation due to its naturally modular nature.
Using a standard biped character as an example, you'd generally expect it to consist of the following distinct parts:

Just to recap on an earlier post, a broken hierarchy structure is not suitable for export to a game engine. As such, the broken hierarchy control/driver rig drives a non-broken skeletal hierarchy using point and orient constraints. It is this unbroken skeleton that the mesh is skinned to and from which animation data is sampled from at export

One key feature that you can implement is space switching which provides different behavior types for a limb. A set of spaces for an fk arm or arm ik controller might include (note that fk arm is always point constrained to end of shoulder joint so won't 'break off'):
Here is a quick capture showing how spaces give different behaviour types for the FK arm. I'm using a custom menu to switch spaces here which automatically matches the position of the arm from one space to the next. If I were to using the space attribute you'd notice an orientation jump each time. I'll cover how to set up the matching script and right click menu items in my next post.


Essentially what you are doing is changing the coordinate system that the arm exists in by switching inputs to the orientation constraint at the top of the fk arm or the parent constraint on the group of the ik arm control. Creating a space system is only possible with a broken hierarchy rig, and provides animators with a range of behaviours to enable them to produce work quickly and efficiently. Now, if the default behaviour of an arm or ik control isn't what you need you can change it. Want to shrug the shoulders without having to counter-animate the arms? Great! Want to pin the arm to the hips but it not float off when you rotate the torso? Yep, we can do that too!

Building a space switch for left FK arm
I'm starting with a joint chain from shoulder to wrist duplicated from the bind/export skeleton. They have the prefix 'driver_' as these joints would form part of the driver rig that drives the bind skeleton via point and orient constraints. For the sake of simplicity I'll create spaces based on joints in the export skeleton, normally they'd be hooked into rig systems that don't exist in this demo scene. 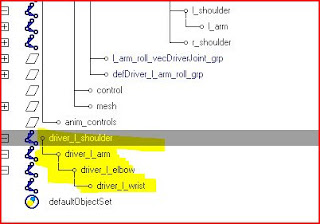 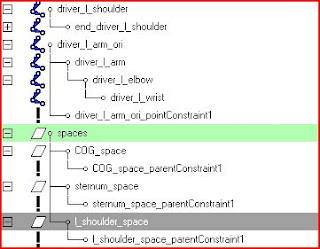 Create an empty group called COG_space_driver_l_arm_ori and snap its position and orientation to driver_l_arm. You can do this by creating and deleting a parent constraint, or by using the custom parent snap functionality.
Make sure the rotation order of this group matches that of driver_l_arm, which in this case is zyx. 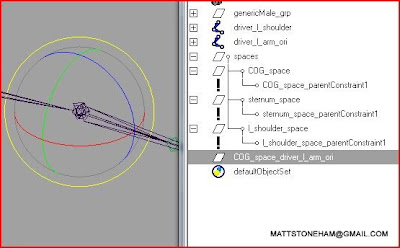 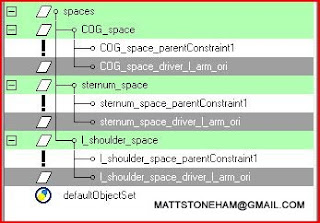 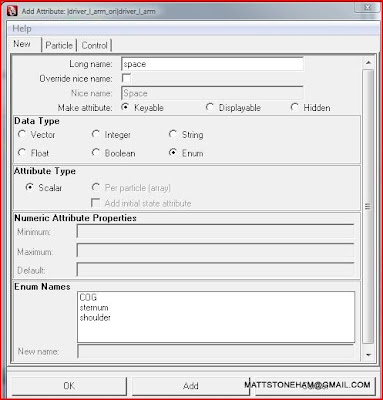 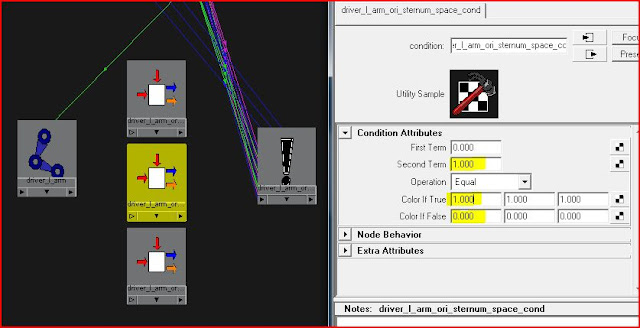 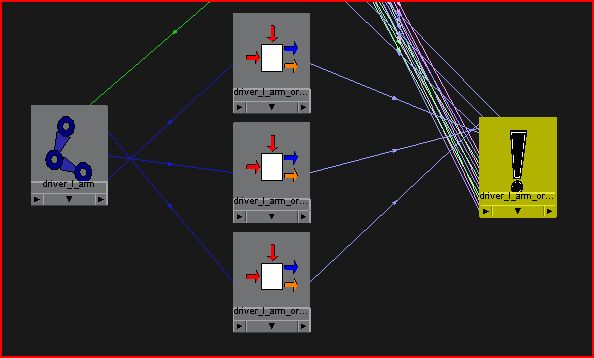 With everything connected you should see the orient constraint weights changing as you change the space attribute on driver_l_arm.

A couple of last bits to do... Parent constrain with offset driver_l_shoulder to sternum. Point and orient constrain with no offset the left arm joints (shoulder, arm, elbow and wrist) of the export skeleton to your driver joints.

And here is a capture of this working.