The aim constraint will be set up on driver_l_foreArm_roll_02. This will inherit the twist rotation only from the wrist joint, then a percentage of this will be used to drive driver_l_foreArm_roll_01 which is located mid-way between the elbow and the wrist. You can see how the skin weighting is distributed across these joints in the previous post.

Here you can see the axis displayed for driver_l_foreArm_roll_02. We need two vectors for the aim constraint - an aim and up. 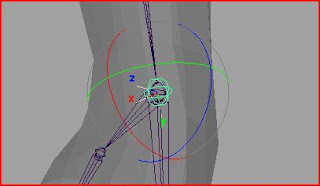 The aim vector is straightforward, in this case it will be -Y pointing towards l_elbow. If your joint orientations are different to mine it may well be a different axis, you should be able to figure out the correct one by displaying the local rotation axis as I have here.

The up vector will be controlled by a locator called driver_l_foreArm_roll_02_upVec which will be parent constrained to the wrist. 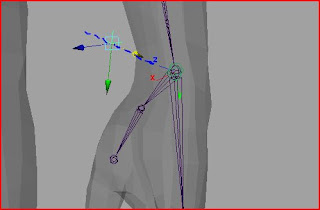 The position of the locator is important. You want it positioned at the side of the wrist, directly in line with the local wrist axis for that direction. For my skeleton this is +Z axis, and this will be the up vector for the aim constraint. Once you've got it positioned correctly, parent constrain it to l_wrist. Here is a quick capture as it's difficult to figure out the position from a still picture.


So, create the aim constraint from l_elbow to driver_l_foreArm_02. The locator driver_l_foreArm_roll_02_upVec will be the world up object and we'll use the vectors we figured out in the previous steps. 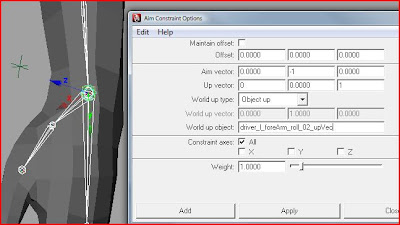 After creating the constraint, check the rotation values for driver_l_foreArm_02. If your locator was correctly positioned and the vectors correct you should have 0 0 0 rotation on this joint. If not you'll need to retrace your steps and figure out what the problem is. A small rotation value would likely point to a slightly mispositioned locator, while large 90 or 180 values would suggest the aim constraint vectors are incorrect.